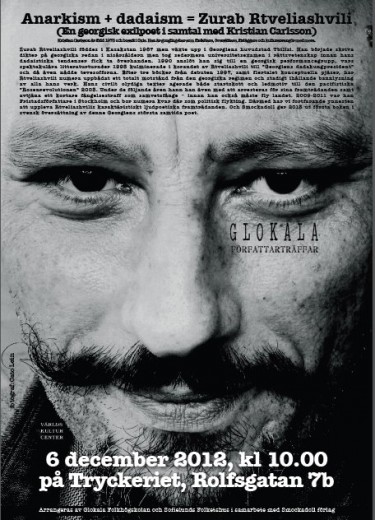 Zurab Rtveliashvili was born in 1967 in Karaganda, Kazakhstan. His early childhood was filled with many fascinating experiences. Already at the early stages of his life, he began to reflect on the existential questions that few attempted to dwell upon.

He studied Jurisprudence in Tbilisi State University and after graduation; he began his career in legal profession. However, at the same time he was unable to restrain himself from writing, not only about his feelings, but about his vision and extraordinary worldview.

Zurab Rtveliashvili started to write at the age of nine and ever since has been writing consistently with great emotional depth and marvelous ability to perform his own creations.

In the beginning of 1990s, he joined the artistic action group that staged a number of intense and inspiring poetic performances. This group was led by David Chikhladze, a multi-media performer. Together, they have organized a big poetic tour “G-K-CH-P”, which means GASTRONOMY-CULINARY-CHICHERIN-POETRY.

The group of poets has performed in many shops and has created multiple public art works with the use of various experimental forms of expression.

Zurab Rtveliashvili was elected the “King-President of Georgian Dada” in 1993 by his fellow poets and artists.

Since 1996 he has joined a number of performance theatres, and over the years he has staged his famous OM MANE PEDME HUM, KALIUGA ISTERIA and other well-known plays.

Zurab Rtveliashvili was a very prominent member of civil disobedience committee during the Rose Revolution in 2003. His famous poem I am the Vine was recited many times during the revolution and was one of the major contributing factors of the revolution itself. His anarchistic philosophy has influenced many segments of Georgian society, from intellectuals to rebellious teenagers.

In 2005 he was one of the founders of the Egalitarian Institute. He frequently performed his public art works in the streets of Tbilisi. For this he was arrested a number of times by Georgian authorities in 2006. He has served one month sentence as a “Prisoner of Conscience,” as the media dubbed him, together with four of his colleagues from the Egalitarian Institute.

Currently he is considered one of the most widely read Georgian poets and his extraordinary style of performance, together with his insightful writing attracts many supporters around the world. Translated to Swedish, English, French, Dutch, Russian, Azerbaijani and German, his works have been published in numerous international poetry anthologies.